People said hello and I briefly replied and excused myself to the rearmost room and its rearmost booth, where I sat quietly alone and ate a mozzarella stick for fuel to get through the 25-minute reading for Chance Operations last Monday night. The Chance Operations series run by St. Louis artists/poets Tony Renner and Chris Parr just celebrated its second anniversary. I had read there before and loved it; anything goes. So I had some risky / risque poems to read, work that, shall we say, painted with a broad brush, poems that normally would not see the light of day nor be aired. I didn't do "blue" material just to do it. The poems had actual content, and I am also interested in literary expectations and the boundaries between what is and isn't acceptable. Also at this point I have nothing to lose and for an artist this condition is ideal.

It went well. This entry is not about the work or how it was received (just fine!) but on the exceptional demands that "blue" material makes on the speaker. First I had to slenderize the poems so none of them sounded blue for blue's sake, making sure each line carried genuine content. At Chance Operations delivery really counts: Entertainment is valued. And real entertainers don't falter, shuffle through papers, get self-conscious, apologize for their material, mumble or mess up, and they care about timing and shadings in volume, speed and tone. They can't be worried about their clothes or looks, so I wore the simplest possible thing. I wanted first to have no patter at all before and between poems but saw I needed to give context at least twice but kept it very short. While rehearsing I kept revising, so the poems were not completed until the day of the reading. It was evening and I knew I would be physically tired before I even started, so I asked to "go first" and carefully geared myself up with a cup of coffee and protein, and sat alone to get focused and centered. It was going to take enormous confidence. I have never disciplined myself so severely for a poetry reading. The preparation paid off, though. Entertaining is no joke!

My co-readers on that evening were Eileen G'Sell and Gabriel Fried. The photo was taken by Tony Renner. Thanks to Chance Operations for the chance!
Read more...
Sep 02

After conducting and writing up scores of interviews, including literary interviews in Meet Me: Writers in St. Louis and on this blog, I now get my turn. Walrus Publishing requested an interview with me, out of the blue, and I took it as an honor. Here it is on Walrus's great new website: http://www.walruspublishing.com/feature/sitting-catherine-rankovic/.

I hope to soon be back to you writing regular entries here after a period of dawn-to-midnight work and adjustment to new routines!

This month marks my 25th anniversary as a teacher of writing (and sometimes Afro-American Studies). It is my 14th year at Washington University evening school (University College), my first year as an online instructor in the MFA program at Lindenwood University. I have twice taught graduate creative nonfiction writing at UMSL (which seriously needs a creative-nonfiction prof), three times in the Washington University Summer Writers Institute, taught  undergraduate composition and creative writing at St. Louis Community College, Wash U and Syracuse University, and taught for the first five years of the St. Louis Writers Workshop, plus half-day workshops in UMSL's "Just Write" program and various and sundry guest teaching and lecture spots at OASIS, Lifelong Learning, Lindenwood U, Webster U, and Poets in the Schools.

I've got a lot to share. So if you want to take a course or workshop with me--you will not be sorry! And thank you for letting others know, too!

Likeable Quotations About Writers and Writing

The social responsibility of the artist is reuniting people with their reality. â€“ I Ching

When I stop working the rest of the day is posthumous. Iâ€™m only really alive when Iâ€™m writing. â€“ Tennessee Williams

All critics are infantile before the texts. â€“ Catharine R. Stimpson

When I stand before God at the end of my life, I would hope that I would not have a single bit of talent left, and could say, â€œI used everything You gave me.â€ â€“ Erma Bombeck

One has to commit a painting the way one commits a crime. â€“ Degas

Thanks to impermanence, everything is possible. â€“ Thich Nhat Hanh

When the right words hit, I own the previously unknown, repossess the past, and my heart rings like a bell. â€“ Mary Ann deGrandpre Kelly

Are We Feeling Better Yet? 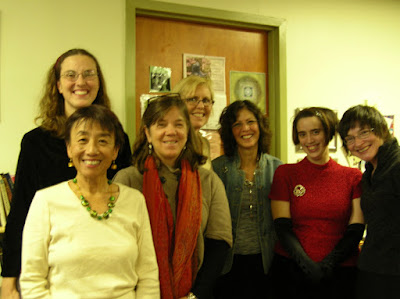 Some contributing writers and the editors at the book launch today, 11/19, for the fabulous new anthology Are We Feeling Better Yet? Women Speak About Health Care in America 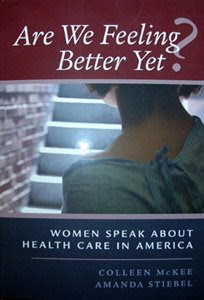 (Penultimate Press), edited by Colleen McKee and Amanda Stiebel. Book will be on Amazon.com very soon; $19.95; click here to see and order directly from the publisher, St. Louis's only nonprofit press. The book -- 21 essays, three years in the making -- will make a great holiday gift for any woman finding herself in contact with the U.S. health care hydra. In the photo, left to right: Amanda Stiebel, Cathy Luh, Janet Edwards, Corrine McAfee, Denise Bogard, Colleen McKee, Catherine Rankovic. Penultimate Press, run by Winnie Sullivan, is a nonprofit organization. Taken at the University of Missouri-St. Louis.
Read more...
Apr 19

. . . . Honesty is power. We know this because half our upbringing is learning how and when to put a lid on it. Our culture idealizes honesty, but most of our institutions and social customs are not built on it; instead, they are built to withstand its force. In place of speaking honestly, we are taught to use honestyâ€™s back roads: gossip, kidding, sarcasm, exposÃ©. â€œTell us what you really thinkâ€ is usually only said, these days, as a way to shut you up.

. . .Intimate essays and memoirs and poems serve as antidotes to daily low-grade mandatory dishonesty. My motives for writing intimately, besides the pleasure of telling my version of events, include exploring what happened and why, finding excuses for myself, getting even, and nailing hypocrisyâ€”and I am as honor-bound to nail my own as I am to nail someone elseâ€™s. Itâ€™s not just a matter of honor, either. If I know I did wrong and in my writing I donâ€™t admit to it, my writing will lack the voltage of honesty.

The personal essay or the memoir provides a portal through which the reader may pay a visit to himself, his real self, the one who doesnâ€™t have to dissemble or lie. Just as an athlete has a moral obligation to not use performance enhancers, the writer of first-person nonfiction is obliged to present readers with an honest record of human experience, not only because it is human but also because honesty itself needs preserving.

On my computer I have stuck a little note: â€œI have a doctorâ€™s excuse to tell the truth.â€

Hidden in that note is a piece of folk wisdom: that the truth is medicinal, that it cures. We believe this so fervently that when we hear a memoirist has lied, we feel outraged, as if we had been given poison instead of medicine. . . .

I Get the Going Rate

Just to let you know: I am getting the rate that I asked for, the going rate! I forced myself to grow up and ask for what I am worth after 30 years of writing and 20 years of college teaching.

Now I see that it was always a matter of growing up. And asking for what I want, and not settling for less. I had to step out of my comfort zone. My old comfort zone was about half the going rate. Isn't that pathetic? But now I am a grownup. A professional who finally asks for and gets paid a professional rate. It's a wildly new feeling. The air I breathe feels different. I have more energy. I have more confidence!

Don't know what to charge for your writing-related services? Consult the chapter "How Much Should I Charge?" that appears in the front matter of every annual Writer's Market. In the 2006 Writer's Market, that chapter begins on page 68.

Whatever your comfort zone is, whether financial or artistic, I urge you to try stepping out of it.
Read more...
Jun 21

The Green Light for Creative Writing

Gently, shine the green light on these thoughts. You have a green light to write -- whatever you want -- and be great.

Having trouble picturing a green light? Draw a traffic light. Draw rays coming out of the green lamp.

Every time you see a green light, no matter where you are, tell yourself, "That's the green light for my writing."
Read more...
Page 1 of 2

rankovic “Journalism is printing what someone else does not want printed. Everything else is public relations.” - George Orwell
May 09 • reply • retweet • favorite

rankovic @ShaunLKelly1955 Thank you, Shaun, for the interview and photos. I posted them yesterday on https://t.co/0O1RnYBrJN… https://t.co/VgLz2VajOK
May 05 • reply • retweet • favorite